You are here: Home › Our Works › Marine Parade: Refurbishment in Brighton 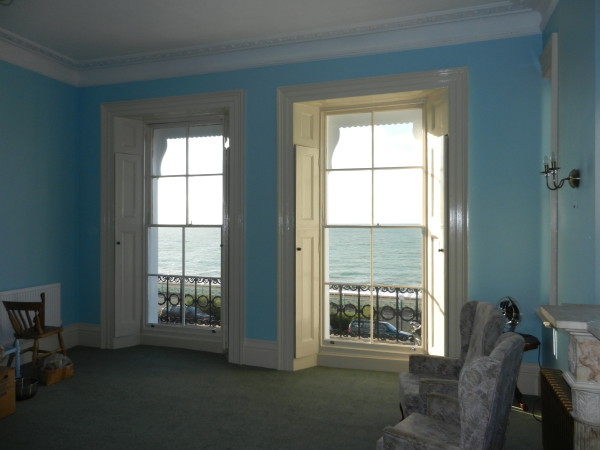 The client was looking to purchase this property and came to Grumitt Wade Mason in the first instance for a Building Survey and a Market Valuation.

A fine example of a 5-storey Regency terraced Grade II Listed Building on Kemp Town seafront in Brighton, East Sussex. This is a splendid and rather rare example with most original internal features intact.

“We found Grumitt Wade Mason very professional in dealing with quite a complex project involving a previously badly looked after and badly converted Listed Building. They helped us steer a good path through the rigours of the Heritage Team at Brighton & Hove Council while working closely with us as the client to get the adaptations to suit our particular needs.”

The client was looking to purchase this property and came to Grumitt Wade Mason in the first instance for a Building Survey and a valuation (Market Valuation). However, the client knew the building needed refurbishment and wanted to change it from flats back to a single house. They needed someone who could advise on the condition of the building as well as repairs and alterations.

The client wanted to convert the property back into a house which meant we had to apply for planning permission. Happily, the local authority supported this.

Previously, the property had been a self-contained lower ground floor and then the upper floors were one unit.

We also had to get listed building consent for new stairs and Building Control approval.

Building Control wanted fireproofing on the doors (original Regency) which then required Listed Building consent. This involved plenty of bouncing back and forth between the Conservation Team, Building Control department and Planning department – all at the local authority. Grumitt Wade Mason dealt with all these departments to obtain approval for their design.

Preparing a specification of works and tender

Once the client had agreed the scheme and all necessary statutory consents were in place, Grumitt Wade Mason put together contract documents – including a specification of works and design drawings – and submitted these to three building contractors to price.

We analysed the priced documents for errors or omissions and produced a written analysis for the client.

What did Grumitt Wade Mason do?

Grumitt Wade Mason was also involved throughout the construction works as Contract Administrator. We…

Were there any challenges within this project?

There were a number of quite serious issues that we had to address on this project:

1. Finding a long-term solution to dampness in the basement

There was dampness in the basement – and this was an area the client wanted to be able to use for storage.

We decided to use cavity drained tanking to solve the problem – this allows the water to continue to seep through the external wall but then controls it in the air gap. We dig a little hole at the bottom to collect the water (a sump) and this has a pump connected to a pipe that then takes the water away.

This is a superior system to a simple waterproof barrier (which can get holes and leak and is normally waterproof cement or render) and offers a longer guarantee.

The client had both alternatives costed up to make a decision and went with our recommendation.

There were quite a few defective lath and plaster ceilings but we were able to salvage, strengthen and repair most of them. Before construction work started, we reinforced them with strips of wood, screwed in place, to stop them falling down.

Afterwards they were all assessed and many were repaired by screwing into the joist – screws and washers – and resecuring the cornices around the perimeters too. Some ceilings were replaced – we used local contractors experienced in the use of natural lime.

The upper levels had very springy floors and cracking to walls and partitions so we designed an elaborate scheme to strengthen the floors.

We put steel beams within an internal partition that gave support to the floor above and below.

There were some structural cracks in the main walls that needed repairing. This is quite a common problem in Regency developments because the facades were usually built before the houses; they would build the facades, sell off the plots behind them to individual developers who would then build the house.

Unfortunately the houses weren’t always tied to the facade very well. The front wall and party walls were not well jointed so you start to get cracks.

We made sure it was tied back with steel reinforcement ties embedded in mortar. This should see the house through for another 100 years or so!

We did some work to improve sound insulation in the floors. This was the client’s requirement to make the property quieter to live in.

However, it was an issue for a Listed Building – we had to submit full details to the Conservation Team of where and how the insulation would be installed – it went under floor boards, on top of floor boards and between new partitions.

Lots of the floor boards had to come up anyway for electrics and so on so this was a good opportunity to install insulation.

The old wooden floors at lower ground floor level had rotted. Grumitt Wade Mason noted this on the Building Survey and the construction of new wooden floors was part of the design.

7. Serving Notice under the Party Wall etc Act of 1996

We had to serve Notice under the Party Wall etc Act of 1996 to the adjoining owners because the structural cracks to the front of the building where the front wall was tied in went through to the adjoining properties on either side.

Reflections on the project

This was an interesting project to work on as it involved the whole range of our services and called on our relationship management skills too – with so many conflicting requirements we had to work hard to reach a solution that would satisfy everybody. We developed a strong relationship with the client, who was very hands on.

It is a beautiful property – although at the lower ground floor lots of original features had been lost, elsewhere they were remarkably intact.