You are here: Home › What Causes Black Mould in 1960s Purpose-Built Blocks?

The cold nights are drawing in, you’re about to dust off the winter coat, and that black mould has started to appear in the same spot again!

Black mould is linked to condensation, which is common in 1960s purpose-built blocks. Why? The answer is usually cold bridging.

What is cold bridging?

The technical definition of cold bridging is when an area with a significantly higher heat transfer than the surrounding material can transfer this temperature to internal surfaces by ‘bridging’ between the outside and inside.

This purpose-built block has exposed concrete slabs. The slabs form part of the floor/ ceiling construction. The un-insulated slab is exposed to the cold air outside and transfers this to areas inside the building, such as the ceiling. Condensation then forms on the ceiling. 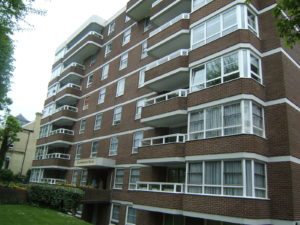 The white lines are the exposed concrete slabs

I surveyed a similar property recently.  The occupants were having problems with black mould and dampness, particularly on the ceiling. The water didn’t seem to be coming in from the outside, so we asked for the plasterboard ceiling to be exposed to check the slab. Below is a photograph of what we found. 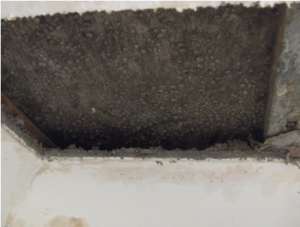 Water droplets on the base of the slab

Condensation had been forming on the base of the slab, dripping onto the ceiling and running down the wall. This meant more moisture in the room which then caused black mould to appear in other areas too.

There were three possible solutions to this problem:

If you are a leaseholder, defects such as cold bridging can be a big problem in terms of inconvenience and cost. In most cases, the problem relates to an inherent defect with the building and remedial works are not usually the responsibility of the freeholder.

Potentially Serious Defects In Your New Property: Part 2
What is BIM? A Beginners Guide