Posted on 17th December, 2015 in Architectural

Slandering: it seems to be a right of way for building surveyors when discussing the new and proposed architectural ‘wonders’ which grace our eyes every year.

But there is such a difference in opinion when it comes to surveyors and preferred architecture.  Some award architects for their innovative, modern and sustainable design process, whilst others look for functionality, originality and size.

Below, I have gathered together some of our surveyors’ (and my own) top new builds of 2015:

This is my favourite for its contemporary urban design and creation of outdoor spaces. 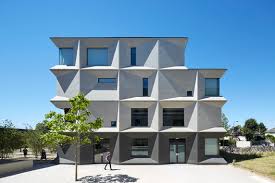 Burntwood School in South London has won the RIBA Stirling Prize – the UK’s most prestigious award for architecture.

Designed by Allford Hall Monaghan Morris, this school was chosen as RIBA winner because ‘it demonstrates the full range of the skills that architects can offer to society. It encompasses great contemporary design and clever reuse of existing buildings as well as superb integration of artwork, landscaping and engineering.

It is a genuine collaborative project. There was a wonderful working relationship between the headteacher and the architect: a true partnership of equals.’ (RIBA judges 2015)

I chose the Waste House in built by Brighton University.  For every 5 houses built, the equivalent of one house ends up as waste.  This building has been built using reclaimed materials and such innovation should be applauded. 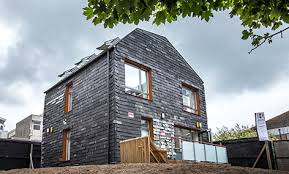 Although built in 2013, this amazing piece of architecture has come to light in 2015 as it was nominated, and short-listed, for the RIBA Annual Sterling Prize 2015.

The house is included as part of the Eco Open House weekends held in Sussex in a bid to drive sustainability and recycling and raise awareness of just how much waste we throw away – A rising priority in Brighton & Hove.

It was a finalist for the 2015 Stephen Lawrence Prize, funded by the Marco Goldschmied Foundation in memory of the teenager who was on the way to becoming an architect when he was murdered in 1993.

The university of Brighton collected a £1,000 Special Prize at the Royal Institute of British Architects (RIBA)’s annual Stirling Prize ceremony.

The interface between the proposal, original property and its surroundings, show how period buildings can be successfully changed to meet current need by sympathetic design and choice of materials. 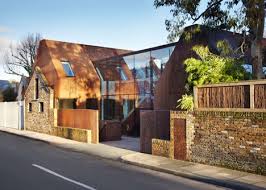 A self build with innovation, the Kew House is a great example of pre-fabrication done right.  This year it won the RIBA NATIONAL AWARD 2015.

It boasts an entirely unique construction, with bonded insulation to the sandwich panel roof and gutters and chimneys formed in the same weathering steels, it avoids any reference to architectural convention – the aim for most modern day architects.

I like the way it blends in with the trees. 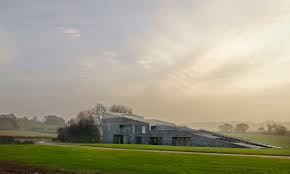 Designed by Skene Catling De La Pena, this beautiful property sits in the fields of Buckinghamshire.

Constructed in 2014, it has just won the RIBA South Building Of The Year 2015 for its use of the natural surroundings and landscape which have been elegantly incorporated into the design.

The home, currently occupied by residents, guests and artists is meant to resemble the two wedges of geology, thrusting up through the flat landscape.

Ffion (Me) – House at Maghera – County Down

I chose the ‘House at Maghera’ because of its faultless, well-thought-out combination of traditional form and modern style, resulting in an elegant piece of architecture that captures the beauty of the surrounding nature.

House at Maghera – County Down

Claiming the RSUA award 2015, this property sits on the side of the Mourne Mountains and is composed of two linear traditional building forms.

Slightly rotated upon each of its neighbouring forms, each form seams effortlessly with the next via the extension of roof slopes.

Designed by McConigle McGrath, the property has an effective toll on its natural surroundings and anchors itself to the landscape through shading  and light from external walls and steps.  A well situated and designed property.

As Clear As Day: Why Use Frameless Glass?
9 Property Defects To Check When Viewing A House